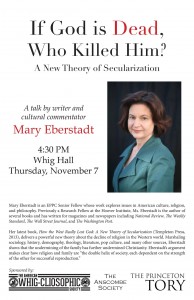 Together with the Tory and Whig-Clio, Anscombe is hosting Mary Eberstadt for a lecture on her new book How the West Really Lost God: A New Theory of Secularization. Many people think that secularization led to a decline in moral and family values (“the family that prays together stays together), but Eberstadt argues that rather the collapse of the family caused the decline of faith in the West. It should be an engaging talk, and it’ll be interesting to see Mrs. Eberstadt defend such a bold thesis. Check out the facebook event also.