Please join us for the Princeton Anscombe Society’s 10th anniversary event, Sex and the

Academy, a panel discussion today from 4:30-6:30 at McCormick 101, which will feature some of the most recognized names in philosophy today: John Haldane, Roger Scruton, and Candace Vogler, and moderated by our own Professor Robert P. George. Panelists will discuss the role of sex, gender, value, aesthetics, and the transcendent in university life. Sponsored by the Princeton Anscombe Society and co-sponsored by the Princeton Philosophy Department. Light reception to follow the event.

John Haldane is Professor of Philosophy at Baylor University as well as Professor of Philosophy and Director of the Centre for Ethics, Philosophy and Public Affairs in the University of St Andrews. He is also a Senior Fellow of the Witherspoon Institute, Princeton. He has published more than 200 academic papers in the history of philosophy, the philosophy of the mind, metaphysics, and moral and social philosophy. He is co-author of “Atheism and Theism” in Blackwell’s “Tomorrow’s Classics” list and author of “An Intelligent Person’s Guide to Religion.” He has produced two volumes of essays on philosophy and religion, “Faithful Reason” and “Reasonable Faith”; and a volume on ethics entitled “Practical Philosophy.”

Candace Vogler is the David B. and Clara E. Stern Professor of Philosophy and Professor in the College at the University of Chicago. She has authored two books, John Stuart Mill’s Deliberative Landscape: An essay in moral psychology (Routledge, 2001) and Reasonably Vicious (Harvard University Press, 2002), and essays in ethics, social and political philosophy, philosophy and literature, cinema, psychoanalysis, gender studies, sexuality studies, and other areas. Her research interests are in practical philosophy (particularly the strand of work in moral philosophy indebted to Elizabeth Anscombe), practical reason, Kant’s ethics, Marx, and neo-Aristotelian naturalism.

Roger Scruton is a philosopher, public commentator and author of over 40 books. He has specialised in aesthetics with particular attention to music and architecture. He engages in contemporary political and cultural debates from the standpoint of a conservative thinker and is well known as a powerful polemicist. He is a fellow of the Royal Society of Literature and a fellow of the British Academy.

Robert P. George holds Princeton’s celebrated McCormick Chair in Jurisprudence and is the founding director of the James Madison Program in American Ideals and Institutions. He is chairman of the United States Commission on International Religious Freedom (USCIRF). He has served on the President’s Council on Bioethics and as a presidential appointee to the United States Commission on Civil Rights. He has also served on UNESCO’s World Commission on the Ethics of Scientific Knowledge and Technology (COMEST), of which he continues to be a corresponding member. He is a former Judicial Fellow at the Supreme Court of the United States, where he received the Justice Tom C. Clark Award. He is the author of numerous books and his scholarly articles and reviews have appeared in such journals as the Harvard Law Review, the Yale Law Journal, the Columbia Law Review, the American Journal of Jurisprudence, and the Review of Politics.

We applaud this recently-published letter to the editor by Dr. Brian Zack ’72, which skillfully critiques the current University policy and tone on sexual ethics. We  are looking forward to an official response from the University soon.

“I urge you to consider a rewrite for future productions, to portray abstinence as a valid and socially respectable choice, to include contraception and STDs in the discussion and to highlight the importance of drinking in moderation. If I remember correctly, all of these were essential parts of ‘Sex on a Saturday Night.'”

Jonathan V. Last describes the “bait-and-switch strategy” of those attempting to redefine the institution of marriage in The Weekly Standard:

“Of course, not everyone in the same-sex marriage movement wants to help traditional marriage evolve into something better. Some want to burn it to the ground. Again in the New Republic, for instance, one member of a married lesbian couple wrote about her quest to use her own brother’s sperm to impregnate her wife. Why would she seek to do such a thing? Because ‘The queer parts of me relished the way it unsettled people. Uprooting convention, collapsing categories, reframing and reassigning blood relations was a subversive wet dream.’ This is quite intentionally not, as Andrew Sullivan once promised, a “virtually normal” view of marriage.”

See below for some photos and a link to The Daily Princetonian’s coverage of Professor Edward Feser’s lecture this past weekend – a dandy time was had by all. 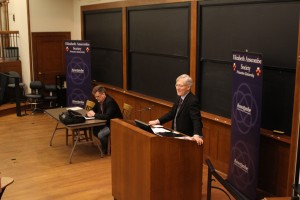 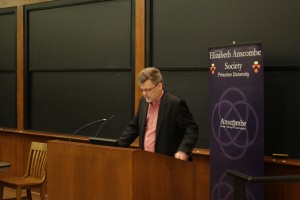 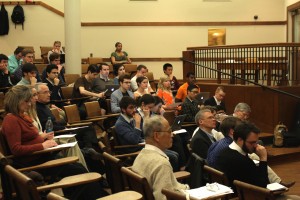 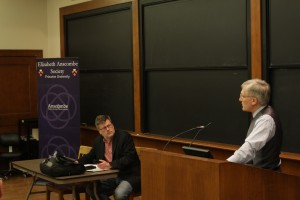 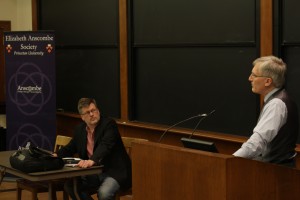 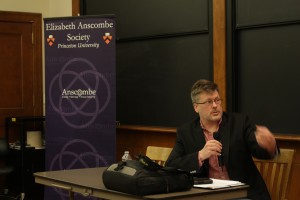 TODAY, April 11th at 4:30pm in Guyot 10, Professor Edward Feser, a philosopher at Pasadena City College, will be visiting Princeton’s campus to give a public talk about  Sexual Ethics and its natural law foundations. After the talk, a group of Anscombe members will meet with him for dinner. We’re really looking forward to the talk and dinner with Professor Feser, who has been lauded by National Review as “one of the best contemporary writers on philosophy.” 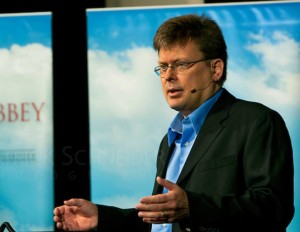 “On a Thursday morning in late June 2015, Americans will be treated to the Court’s decision about altering an institution as old as recorded human history. But one thing that day will not change is the portrait of same-sex households with children. After a series of population-based data-collection projects, we know what that looks like: a clear step down, on average, from households that unite children with their own mother and father.”

George, who addressed natural law, the liberal arts, and ascendance of Anscombe Societies on college campuses. See the excerpt and follow the link below to read the whole interview:

“Students join organizations such as the Anscombe Society because they see the carnage of the sexual revolution all around them…Anscombe students know that we as individuals and as a society needn’t settle for this—that we can aspire to, and achieve, something much better.”